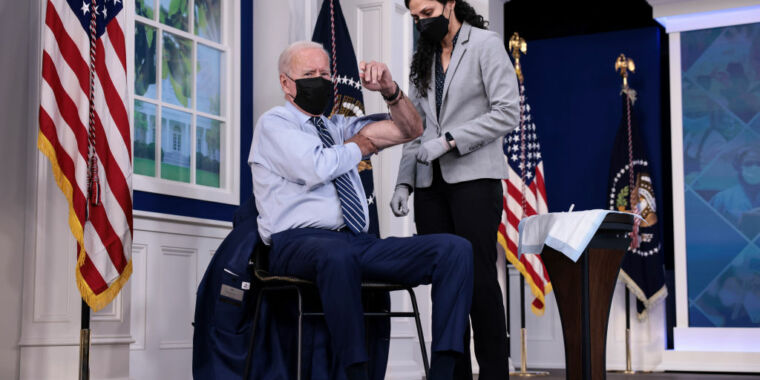 "No greater usurpation of constitutional rights" — 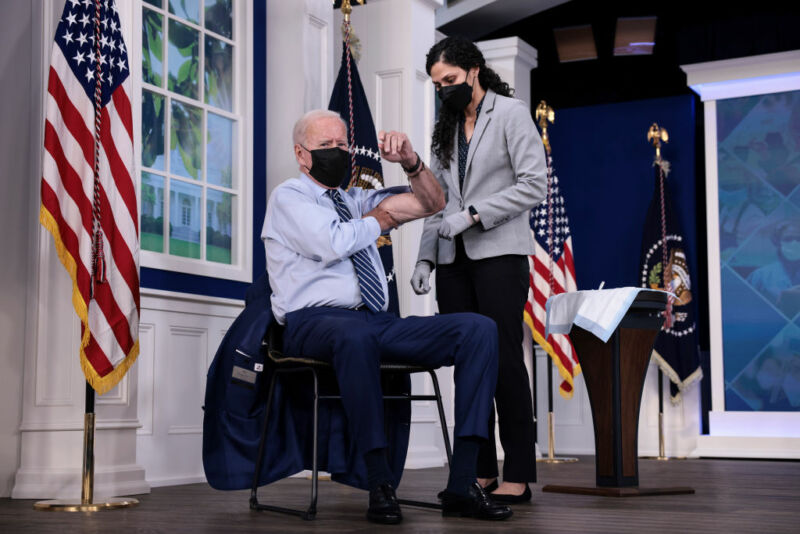 President Biden's vaccine mandate is being challenged in a lawsuit filed by four active-duty US Air Force officers, a Secret Service agent, a Border Patrol agent, and four other federal employees or contractors. The lawsuit claimed that "convicted serial killers who have been sentenced to death receive more respect" than citizens who are required to take vaccines.

The lawsuit alleges that the vaccine mandate forces service members, federal employees, and federal employees to "inject themselves with: (1) a non-FDA approved product; (2) against their will; and (3) without informed consent." Plaintiffs seek a ruling that the vaccine mandates issued by Biden and the Department of Defense "violate the Fifth Amendment's guarantee of substantive due process" and "the equal protection component of the Fifth Amendment." (The Pfizer vaccine does have full FDA approval.)

Plaintiffs also claim the mandate violates the Free Exercise and Establishment clauses of the First Amendment, the Religious Freedom Restoration Act, and other US laws including "Title VII of the Civil Rights Act of 1964 by discriminating against Plaintiffs and service members, federal employees, and federal contractors on the basis of their religion or disability." Biden's order does allow exceptions for medical or religious reasons but exemptions reportedly may be difficult to obtain.

"There is perhaps no greater usurpation of fundamental constitutional rights than forcibly injecting a foreign substance into an American citizen," the lawsuit claims. "The rights of our nation's most heinous convicted serial killers who have been sentenced to death receive more respect than this—and often times, even while already strapped to the chair."

The lawsuit names Biden and Department of Defense Secretary Lloyd Austin as defendants, claiming that "our President's abject derelict [sic] of duty and callous disregard for the laws of this nation have compelled this action." The suit continued:

Americans have remained idle for far too long as our nation's elected officials continue to satisfy their voracious appetites for power while neglecting to uphold and defend the Constitution and preserve the values upon which this nation was founded. Indeed, the forty-seven (47) year subjugation to our Commander-in-Chief's vapid political career our nation has endured leaves little remain [sic] uncertain–with more power, comes greater destitution.

This action seeks redress from Executive Order No.'s 14042 and 14043 (collectively, "Executive Orders") issued by President Biden on September 9, 2021, and an order ("DoD Order") issued by Department of Defense Secretary Lloyd Austin (collectively, Vaccine Mandates") and the unlawful, manipulative, coercive, and deceptive tactics Defendants have employed and continue to employ to facilitate the mass vaccination of all active-duty service members, federal contractors, and federal employees.

US states have more power to take actions protecting the public's health than the federal government does, but Biden's order is well within his authority, according to Georgetown Law professor Lawrence Gostin, director of the O'Neill Institute for National and Global Health Law. Gostin was cited in a Bloomberg Law article as follows:

"While states have near plenary power to protect the public's health, the federal government's powers are limited," Gostin said, adding that Biden "is acting fully lawfully pursuant to those powers."

Gostin said the president "is using his executive power to order vaccinations for the federal workforce. He is using his spending power through Medicaid and Medicare to ensure vaccine mandates in health care settings. And he is using the Occupational Health and Safety Act to mandate vaccinations in all businesses of 100 or more employees. All of these are comfortably within the president's power."

States get their power in part from a 1905 Supreme Court decision in Jacobson v. Massachusetts , a precedent that helped Indiana University defend its vaccine mandate against a lawsuit filed by students. Jacobson "holds that a state may require all members of the public to be vaccinated against smallpox," a federal appeals court noted in an August 2021 ruling. Gostin explained that Jacobson isn't relevant to federal law but that Biden's order was lawful anyway.

The Department of Justice wrote in July that Section 564 of the Food, Drug, and Cosmetic Act allows the Food and Drug Administration to issue an Emergency Use Authorization (EUA) for vaccines and other medical products under certain emergency circumstances. The DOJ also said that this law "does not prohibit public or private entities from imposing vaccination requirements for vaccines that are subject to EUAs." While COVID vaccines have been administered under EUAs, the FDA granted full approval to the Pfizer/BioNTech COVID-19 in August.

Biden is separately facing opposition to his plan for requiring vaccines for health-care workers in US-funded facilities and vaccines or weekly tests for employees of private companies with at least 100 employees. Republican attorneys general from 24 states claimed the mandate is illegal and "a threat to individual liberty," and threatened to sue if the administration doesn't change course. Arizona AG Mark Brnovich already sued Biden to block the vaccine rules.

The lawsuit filed by Air Force members and other federal employees claims that "the US Constitution and numerous federal laws make it unlawful to compel persons to be vaccinated." The plaintiffs cite different reasons for not taking the COVID-19 vaccine themselves. Some object on religious grounds while others have immunity from having already had COVID or are "medically exempt" from COVID vaccination for other reasons.

Biden's executive order directs federal agencies to "require COVID-19 vaccination for all of its Federal employees, with exceptions only as required by law." A separate executive order and related guidance detail requirements for federal contractors. The Department of Defense's mandatory-vaccine order was issued about two weeks before Biden's and covers "all members of the Armed Forces under DoD authority on active duty or in the Ready Reserve, including the National Guard." There's a temporary exemption for service members actively participating in COVID-19 clinical trials to avoid invalidating results of such trials.

The lawsuit seeks a complete reversal of the vaccine mandates or, at minimum, an order that Biden and the Department of Defense "promptly establish objective criterion and an objective procedure by which Plaintiffs and other service members, federal employees, and federal contractors may submit their religious or medical exemptions expeditiously and be able to do so without fearing or receiving unjust or unlawful denials."

Guidance issued by the Biden administration on September 16 says that "an agency may be required to provide a reasonable accommodation to employees who communicate to the agency that they are not vaccinated against COVID-19 because of a disability or because of a sincerely held religious belief, practice, or observance. Determining whether an exception is legally required will include consideration of factors such as the basis for the claim; the nature of the employee’s job responsibilities; and the reasonably foreseeable effects on the agency’s operations, including protecting other agency employees and the public from COVID-19."