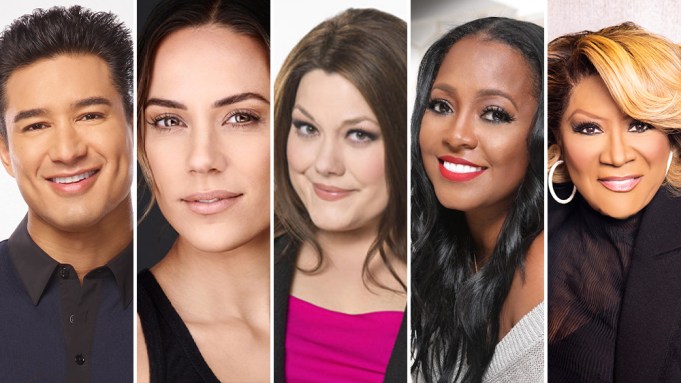 Here are complete details for the three films, provided by Lifetime.

Grace Hill (Pulliam) and Anthony Brown (James) could not be more different. Despite having gone to college to study architecture together, their lives took them on completely separate paths. However, when they’re both hired to work together on the home of Loretta Brown (LaBelle)—a New Orleans praline icon —the two find themselves working together at Christmas…and butting heads over more than just architecture. When Anthony and his family discover that Grace will be celebrating Christmas alone, they invite her to take part in their traditions and their celebrations. Soon, fiercely independent Grace begins to learn the importance of family and community, while modern Anthony learns to embrace tradition and the magic of Christmas. But when Grace is offered a new job far away from New Orleans she’ll have to decide if she’ll leave, or follow her heart.

Tim Reid stars as Marcel Lirette, a handsome, retired friend who moves back to town after years away and catches the eye of Lorretta.

Before Chrissy Kessler’s (Elliott) meteoric rise to fame, the country music superstar was just a small-town girl with dreams of the big time. Now, with her record sales on a rapid decline, Chrissy is strong-armed by an unrelenting record executive to return to the hometown she left behind to perform a live Christmas concert. Accompanying her on this journey is her longtime supportive assistant Eugene (Pintauro). Luke Covington’s (Quinn) quiet life is suddenly disrupted when he runs into Chrissy, his ex-girlfriend and former country music duo partner, who disappeared on him to pursue her solo career, all those years ago. After a tempestuous rainstorm forces the ex-sweethearts to seek shelter in Luke’s ranch home, the two realize that the only way they’ll survive the holidays is with the other one’s help.

Elliott is repped by Innovative Artists, Vault Entertainment and Gochman Law Group. Quinn is repped by Joel King at Pakula King. Pintauro is repped by Jeremy Katz at The Katz Company.

Former Broadway star, Billy Holiday (Lopez), returns to his hometown for Christmas after being abruptly fired as the host-producer-judge of the hit TV series “Celebrity Dance Off.” While there, he encounters Rae (Kramer), the charismatic owner of the local dance studio, where Billy’s 12-year-old nephew is her standout student. This Christmas Rae is planning a dance recital fundraiser with the goal of taking her students to see a Broadway show in New York City. Billy volunteers to help Rae with the recital by reviving the town’s traditional Christmas Eve show which was once a showcase for local talent. With Billy’s knack for producing and Rae’s knowledge of all things local, their collaboration clicks, and romantic sparks start flying!