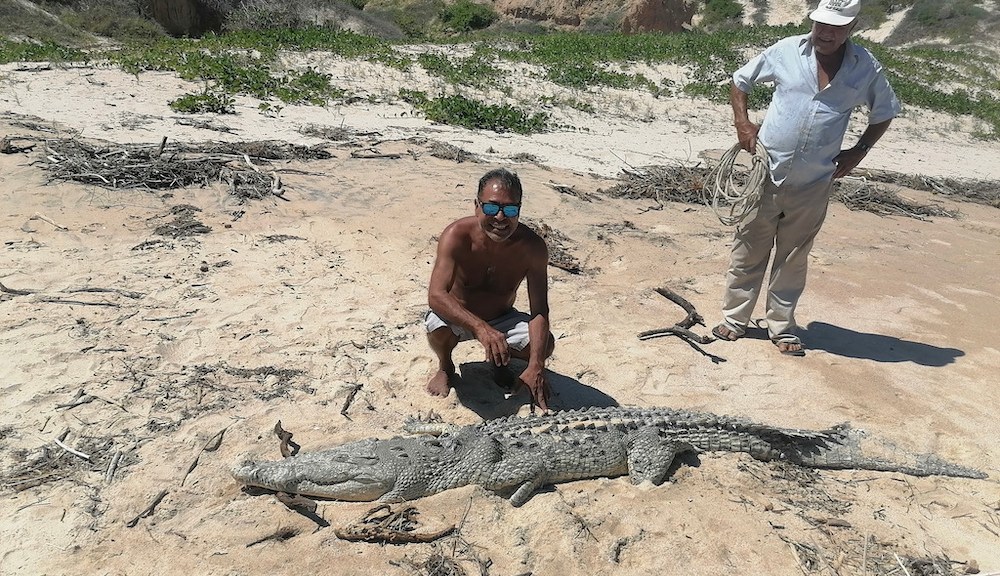 A crocodile carcass was found on a beach in the Mexican state of Baja California Sur on Friday in what might be a first-of-its-kind discovery.

“It is the first time that we have found something like this on our beaches,” Pepe Murrieta, 50, a lifelong BCS resident, stated on Facebook.

Murrieta spotted the 9-foot reptile on the sand at 9 a.m. at Cabo Pulmo National Park in the state’s East Cape region.

American crocodiles are found in tropical regions on Mexico’s mainland, across the Gulf of California, or Sea of Cortez. Wild crocodiles are not found on the Baja California peninsula, where the desert climate is not suitable.

Murrieta, who runs a dive center and restaurant at Cabo Pulmo, noted that the crocodile’s death “seemed recent since it was still in perfect temperature and complete.”

However, Murrieta told FTW Outdoors that the carcass was partially covered in barnacles and that “it looks like it was in the sea for a while.”

He said the crocodile might have drifted across the gulf during recent storms. But the carcass showed no signs of predation.

Wild Canyon Adventures, south of Cabo Pulmo in Los Cabos, states on its website that it exhibits crocodiles and other “rescue animals” in its animal sanctuary.

Spokeswoman Wendoly Gil told FTW Outdoors that all animals are accounted for and remain “under our care and protection.”

Gil said that perhaps the crocodile was formerly cared for by a now-defunct zoo in the town of Santiago. Another recently shuttered local facility also kept captive crocodiles.

It remains unclear whether those reptiles were sold as exotic pets, and whether the crocodile Murrieta found was released or dumped locally by its owner.

Murrieta said government scientists collected the carcass he found and scheduled a necropsy to confirm the species and determine a probable cause of death.